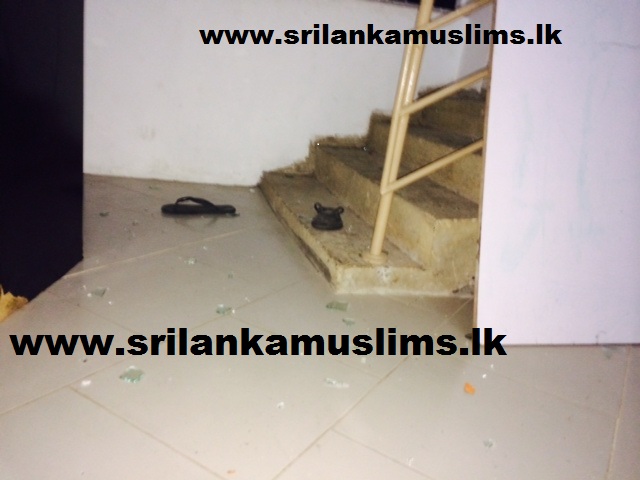 The night before yesterday at about 11:30pm masjidulshafi, a mosque situated at Dehiwala, Kadawatha Rd, was stoned by some anti Muslims groups. It is stated by a motor bicyclist who was there during the incident that they have attacked with stones over roof, windows and then ran away screaming.
The mosque had been damaged in a very bad manner. Further it was stated that no persons were injured.

During the past 3 days, racists extremely have been attempting to destroy the mosque completely. But it’s failed due to the reason that the mosque Shafi has been registered as a property of Waqf under the law and it could be noted that it is being functioned properly during the previous 10 years after registration with government religious department. When the mosque was attacked the devotees who stayed at the mosque were feared, until the situation was brought under control by the Kohuwala Police who urged there.

As per the statement given by the “muadhin”, he said that he was threatened by some racists the previous days. Therefore he had requested some of the devotees to stay along with him that night.It was around 11.30 p.m. While he was getting ready to sleep the mosque was attacked. He further said that he has already informed the trustees, the Muslim politician as well as the media.
Hon. Minister Rishad Bathiudeen and Azad Saali rushed to our mosque at that same night and made observation to take necessary action through police. It was making us happy and gave confidence to us, he said further.

As per the statement given by Minister Rishad Bathiudeen, anti Muslim gangs and other racists who are against the rapid growth of Muslim culture, are in an idea to fully conclude the mutual understanding between the Muslims and Sinhalese of this nation.

He further has requested that these people should be arrested on an urgent basis and have to be produced to courts.

The Minister has promised the Trustee Board members that with the assistance of the Police, they will be able to fulfill their 05 times prayers in an independent manner and also the people in connection with this incident will be arrested by the Kohuwala Police.

He also continued to say that this incident will be brought to the attention of H.E the President and the DIG, in order to defeat these types of enemies through the right path.

Also, Azaad Saali who rushed to the spot made his statements to the general public.

It should be noted that the Muslims of the mosque’s surrounding is in a tensed position due to the attack which have made them fear of those racists.