I can’t watch my daughter die in front of me, says Pakistani father 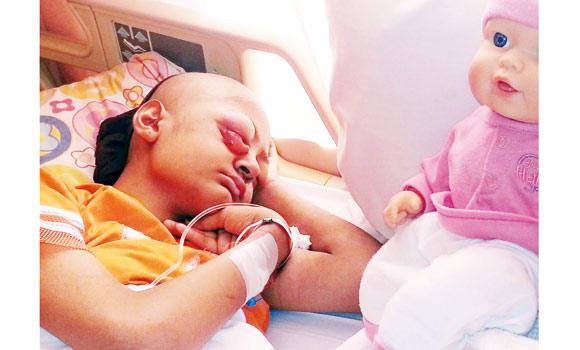 A 12-year-old girl screams through hospital corridors, seeking an end to her painful ordeal.
“Give me poison,” Komala Ahmed, the girl, pleads with her parents.
Komala has been diagnosed with cancer, which is spreading fast across her frail body.
Komala’s mother weeps silently as she holds her hand on the second floor of the Saudi German Hospital and her father sits helplessly in the reception area.
Visitors at the hospital can’t help but wipe their tears upon hearing of the girl’s condition, as witnessed by an Arab News reporter who visited the hospital.
Komala’s father, Manzur Ahmed, works as a driver in Makkah.
Ironically, it was a fall from a swing in a park, resulting in a knee injury, that led to the detection of cancer in Komala’s body.
Ahmed said that he could not afford formal education for Komala due to his limited income, but with grit and determination, she studied at home and appeared regularly for examinations conducted by the Pakistan International School in Jeddah.
Recalling the beginning of their horror tale, he said that Komala had fallen from a swing, which resulted in a knee injury. The wound would not heal and a tumor began to develop in the area. Her parents gathered funds to be able to take her to several hospitals.
“We were in shock over her cancer diagnosis,” Ahmed said.
After consultation, Komala was admitted to the Saudi German Hospital in Jeddah, where she is being administered radiation therapy and other lines of treatment.
“The cost of treatment in the Shoukat Khanam cancer hospital in Pakistan would be around 30,000,000 Pakistani Rupees, which we couldn’t afford. Our relatives in Pakistan are just as poor and can’t contribute to the cost of treatment,” Manzur said.
“I have been in the Kingdom for 26 years and am much more comfortable in Makkah than in Pakistan,” he added.
The disease is spreading fast, with doctors detecting another tumor on one side of her eye five days ago, which has only added to her woes, the father said.
Doctors have advised him to arrange for surgery at the earliest to avoid the spread of the disease to the other eye, which will cause Komala to become visually impaired.
Ahmed said: “Though my financial situation does not allow me to admit my daughter in hospitals like the Saudi German Hospital, I can’t just watch her die in front of me. I am still trying very hard to raise money for her treatment.”