A man with a vision 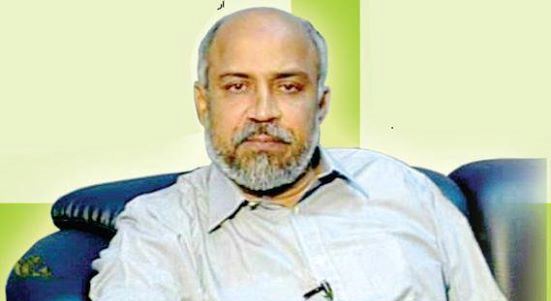 Late M. H. M. Ashraff, one time Cabinet Minister, Member of Parliament and Sri Lanka Muslim Congress and National Unity Alliance founder Leader, died on September 16, 2000 while on his way to his native Ampara District in a Sri Lanka Air Force helicopter which crashed in a blaze of flames in Aranayake.

Ashraff was the only son of Mohamed Hussain, a highly respected village headman and Matheena Ummah whom he loved dearly.

Being a son of the eastern soil he had his primary education at Wesley College, Kalmunai and had to leave his home region to pursue further studies at the metropolis. In 1970 he joined Law College where he excelled and manifested prowess, in the field of Constitutional Law by writing the first book on Constitutional Law in Tamil with particular reference to 1972 Republican Constitution of Sri Lanka. At Ceylon Law College the natural nursery of many a political leader, he was the president of the Law students, Muslim Majlis and of the student community.

In 1974 he joined the Attorney General’s Department as a State Counsel, and worked there to get himself acquainted with the law to become an eminent Lawyer.
He practiced in Kalmanai and completed Masters Degree in Law prior to becoming a Senior Minister. He was honoured with the title President’s Counsel.
Ashraff saw as nobody did before him, the political potential of the Eastern Province with its predominant Muslim Population.

In November 1986 the SLMC became a national political party and created history in Sri Lankan Muslims politics. The symbol of his party was the tree, which was planted and nurtured in the Eastern and Northern Muslim areas in Sri Lanka. In 1989 he contested the parliamentary elections and entered parliament as an MP. At the 1994 general election he was returned to parliament with seven MPs from the east.

Two SLMC MPs were appointed Deputy Ministers and one MP, the party-General Secretary and present leader of the SLMC, played a constructive role to install the President Chandrika Bandaranaike Kumaratunga government in a hung parliament. Ashraff became Minister of Ports, Shipping, Rehabilitation and Reconstructions, Ashraff, fulfilled his responsibilities as a Minister with the utmost dedication and efficiency. The Colombo Port made vast strides under his leadership, achieving the government’s vision of becoming one of Asia’s leading ports.

His dedicated efforts have transformed his home district of Ampara from a backward rural district into a farby developed area, moving rapidly towards modernism.
His single-handed dedication to establish the South Eastern University will be recorded in letters of gold.
His constant struggle to obtain the rights of the Muslim people had much success during the last six years.

He had a vast following among the Muslim people who appreciated his vision, the immense sacrifices he made for their cause and his sincerity of purpose. More than all these the late Ashraff was a man with a very big heart. In friendship he was warm, sincere and forgiving his kindness was limitless.

As a minister, he was not only a policy formulator, a policy implementer, a keen monitor but also a hard task master, in implementing the decisions of the Government he had a total vision. In the problems of the affected and displaced persons and port employees, he acted as catalyst without causing any embarrassment to the government.

His qualities of leadership and respect for bureaucracy developed loyalty and team spirit. Ashraff was a very kind-hearted, sensitive and highly emotional personality always with a ready smile and kind word never failing to greet his staff at least with a smile, and at the same time he was a leader who wanted things done correctly and was a stickler for correct details.
A good administrator should be a good human being. Despite all the knowledge and techniques of administration and management one cannot be a good administrator unless one has good qualities. Late leader Ashraff, possessed all these qualities coupled with attractive talents in ample measure.

Ashraff was a deeply religious man and would commence nothing without remembering the Almighty and seeking his guidance and blessings. He was an excellent writer of Tamil prose as well as English. His genius was in full bloom in his poetic compositions. His anthology of poems has been hailed as a piece of outstanding literacy merit by none other than the former Chief Minister of Tamil Nadu, who himself is a respected Tamil scholar.

M. Karunanidhi was so enthraled by the title of the anthology of his poems that he commented “This title by itself is a matter for contemplated enlightenment and ultimate enjoyment.” Of all the qualities and talents Ashraff wished to outlive him was his literary talents, because he valued them above all other achievements.

He succeeded in installing his long-standing dream of providing a roof to shelter the Sri Lanka Muslim Congress, which he named ‘Dharusalam’ the house of peace and dedicated it to Sri Lanka as a whole.

He worked hard for peace,
“May Allah grant his soul” Jennath Firdouse.